Tribal leaders testify before Congress about sovereignty in legal systems | 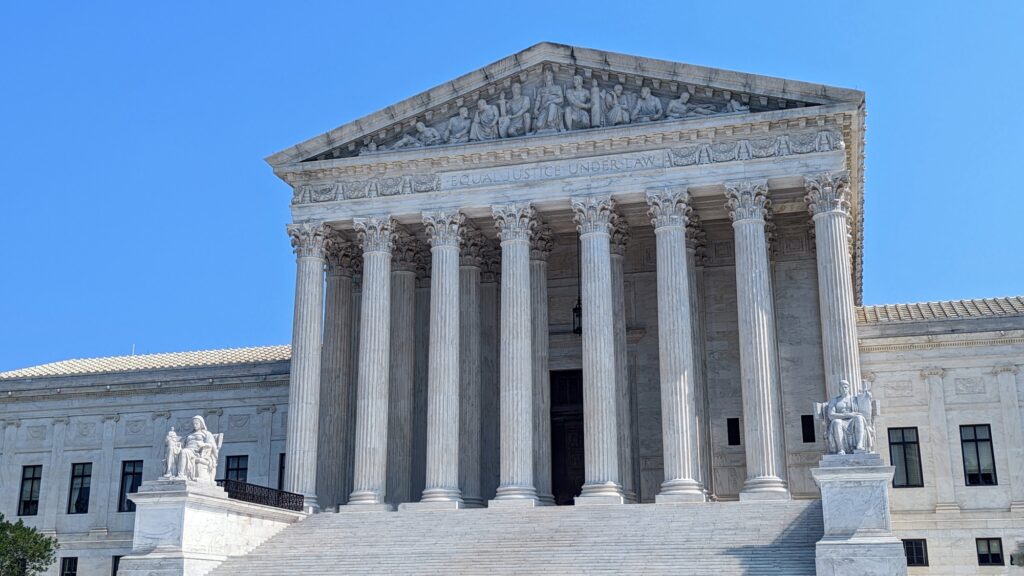 The United States Supreme Court (Photo by Jim Small of the Arizona Mirror for States Newsroom).

Sovereignty on Native American land is being attacked by the United States’ highest court, leaders from various tribal nations told members of Congress this week.

The Supreme Court’s ruling in Castro vs. Huerta earlier this year allows state prosecutors to take over criminal prosecutions for crimes that occur on Indigenous nations, and it’s causing confusion and concern that the decision will not only undermine tribal law but slow the wheels of justice.

“The court essentially flipped the script on state criminal jurisdiction in Indian Country,” Cherokee Nation Attorney General Sara Hill told lawmakers. “But the most troubling aspect of Castro-Huerta could be what it may portend for future cases and legislative efforts.”

During the hearing of the congressional Subcommittee for Indigenous Peoples of the United States, Hill was joined by witnesses from the Oglala Sioux, Muscogee Creek Nation, Bay Mills Indian Community and Tulalip Tribes.

Assistant Secretary of the Interior Department Bryan Newland (Ojibwe) also testified and said his agency will soon host two listening sessions with tribal leaders to gather input on how they’d like to see the administration react to the ruling.

“The Castro-Huerta opinion creates uncertainty across Indian Country. State prosecutors may now accept or decline cases involving crimes committed by non-Indians against Indians in Indian Country, without getting the consent of the tribe,” Newland said at Tuesday’s hearing. “This invites further conflict, and it diminishes the ability of tribes to coordinate with federal agencies on public safety priorities within their communities.

Castro vs. Huerta started is a case from the Cherokee Nation and involves a child from that community. Hill said it was an attempt to reverse an earlier Supreme Court ruling that actually affirmed the power of tribal courts while prosecuting crimes.

“The case was one of dozens the Oklahoma Attorney General brought in front of the high court hoping for an opportunity to overturn the landmark ruling in McGirt v. Oklahoma,” Hill said.

While the ramifications of Castro-Huerta are still unknown, Hill mentioned that federal efforts such as the Violence Against Women Act and McGirt are fostering a tribal court system on the Cherokee Nation that is proving more effective than the state.

She said prior to the McGirt decision in 2020, the Cherokee Nation pursued fewer than 100 criminal cases annually. In 2021, her office has now filed more than 3,700 cases and is on track to increase that workload this year.

With provisions from the Violence Against Women Act, which grants tribes the ability to prosecute people who are non-Native for crimes they are accused of committing against Native Americans, Hill said the Cherokee Nation is preparing “for another jump in our caseload.”

“Given an opportunity to flourish post-McGirt, and post Castro-Huerta I have no doubt that tribal justice systems will continue to be a source of innovation and public safety throughout our nation,” she said.

Hill said Congress needs to meet its obligations and provide adequate funding to tribes so they can meet their obligations to public safety.

Jonodev Chaudhuri, Muscogee Creek Nation ambassador, said further congressional reforms must address sentencing and jurisdictional limitations. Many tribes, due to federal law, are limited in their ability to call for hard-time penalties, including for crimes that are violent.

“If we really want to keep people safe, whether they’re Native or non-Native in Indian Country, we have to empower local decision-makers on the ground and the governments who have the greatest interest in protecting people,”…

WASHINGTON (AP) — Republican leader Kevin McCarthy is in the fight of his political life, grinding through the promises...

The limited at best prospects for major climate legislation under a divided Congress has left many environmental advocacy groups...

Once again, the expiration of the Federal Communications Commission’s (FCC’s) ability to auction spectrum is on the chopping block...

ATLANTA - Two Atlanta-area Veterans Affairs buildings are being renamed for two former U.S. senators from Georgia who served as...

Among the items on Congress’ lengthy to-do list by the end of the year is U.S. Sen. Joe Manchin’s...

Artemis I launch day has arrived

MLB Player Cole Tucker Opens Up About His Relationship with Vanessa Hudgens: ‘I Love Her’