Windsor Hills crash: Arrest made in collision that left 6 dead as first victim is identified

Investigators said that the female driver was going over 100 miles per hour when she plowed into the intersection at the corners of S. La Brea and Slauson avenues causing a fiery multi-car crash that killed six people, including an infant and a pregnant woman.

LOS ANGELES – Authorities Friday began to identify the victims killed in a fiery multi-vehicle crash caused by a speeding car that ran a red light in Windsor Hills that left six people dead, including an infant and a pregnant woman, and eight others injured.

Los Angeles County Fire Department firefighters were called just before 1:40 p.m. Thursday to La Brea and Slauson avenues, near Ladera Park, on what was initially reported as a fire and discovered that as many as six vehicles had collided in the intersection after a Mercedes-Benz was seen speeding southbound on La Brea Avenue, resulting in the fire, the department reported.

Several vehicles involved in the crash erupted into flames and caused a nearby commercial fire. Bystanders tried to help those trapped but couldn’t get close because of the flames.

The pregnant woman killed in the crash was identified Friday by the Los Angeles County coroner’s office as Asherey Ryan, 23, of Los Angeles. Her unborn child, listed by the coroner’s office as “baby boy Ryan,” was also counted among the deceased. Family members told FOX 11 that Ryan’s infant son was also killed. His name has not yet been released. 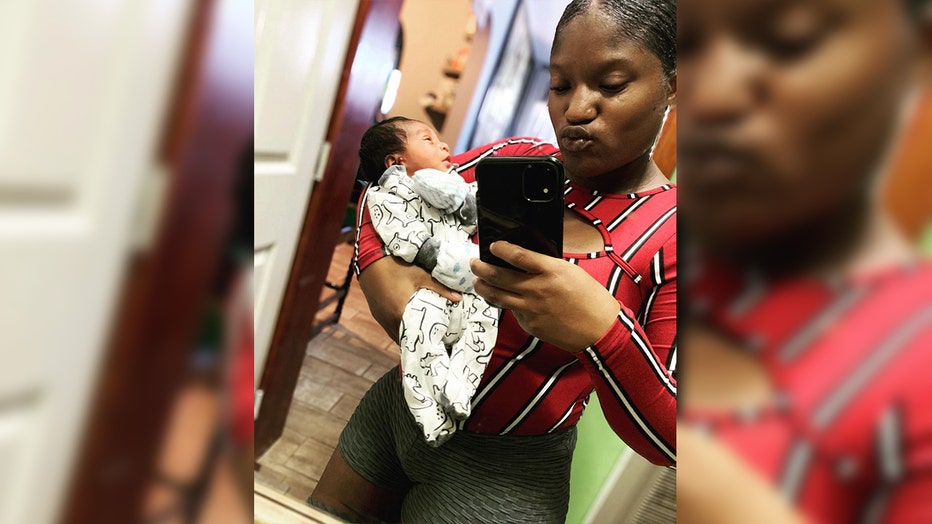 Asherey Ryan and her unborn child were killed in a fiery crash in Windsor Hills that left six people dead. Her infant son was also killed. (Photo provided by family) (FOX 11)

Also among those killed were two additional adult females and an adult male. Their identities have not yet been released pending notification of next of kin.

Video from the scene showed the suspect driving the Mercedes-Benz at a high rate of speed, running a red light at the intersection and crashing directly into a dark-colored sedan, which in turn struck several other vehicles. The Mercedes-Benz and two other vehicles burst into flames following the collision, and the wreck came to a stop at the southwest corner of the intersection after striking a gas station sign.

Windsor Hills crash: Mercedes-Benz runs through red light before getting into deadly wreck

Shocking video shows the moments the Mercedes-Benz ran through a red light. The video showed the before and after of the horrific crash that left several people dead, including baby and an unborn child.

The fire department and the California Highway Patrol initially reported three adults and one infant died in the collision, and that there were multiple ejections due to the crash. One of those killed in the crash, a pregnant woman, lost her baby as a result of the collision and the unborn child was being counted among the deceased.

The CHP reported a sixth victim was later found dead in the burned wreckage of one vehicle. At least eight other people, mostly children and teenagers, were injured in the collision. All eight patients were transported to the UCLA Medical Center. Seven patients were released after being triaged in the emergency department Thursday night and one patient was admitted in fair condition.

The Mercedes-Benz was driven by a 40-year-old woman who was being treated at Ronald Reagan UCLA Medical Center for major injuries, according to the CHP. The female driver was arrested on Friday morning, the CHP said.

Her name was not released.

The CHP has announced it intends to recommend the District Attorney file charges against her.

The intersection of La Brea and Slauson avenues reopened around 3:30 a.m. Friday.

CNS contributed to this report.

Polio outbreaks incited regular panics decades ago, until a vaccine was developed and the disease was largely eradicated. Then...

On a recent afternoon, Stephanie Carrie walked up to a cork oak tree on Potomac Avenue, a residential street...

The Federal Aviation Administration said Friday it is allowing Delta Air Lines to cut some flights this summer at...

What's the new buzz around Pabst Blue Ribbon? Well, the beer company with ties to Chicago is tapping into...

Ald. King calls for top cop to be fired over ongoing violence Chicago's newest candidate for mayor is blaming...