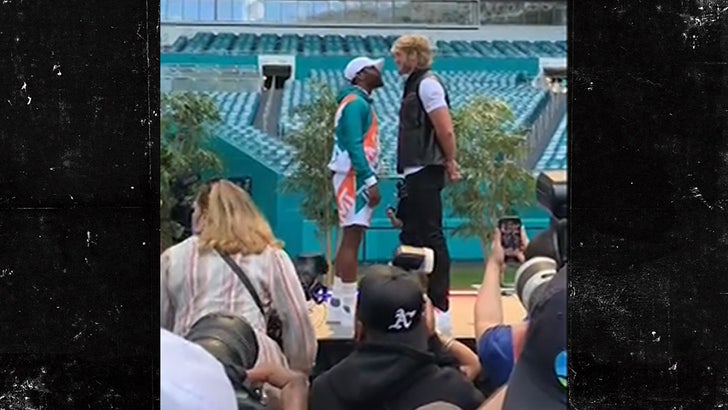 1:33 PM PT — Whoa!!!! Things just got VERY physical between Floyd Mayweather and Jake Paul during a confrontation AFTER the face-off between Floyd and Logan.

Jake got in Floyd’s face while Floyd was doing an interview and snatched the baseball cap off of Floyd’s head.

Things went berserk from there — and it appeared as though punches were thrown. Hard to see who threw the shots and if anything landed. You could see Jake’s shirt was ripped and stretched out after the melee.

Mayweather was PISSED — and raged after the two sides were separated, unlike anything we’ve ever seen from him before.

At one point Floyd shouted, “I’ll kill you mother****er.”

He also vowed to knock out Logan in the fight — calling the Pauls “two fake fighters.”

Logan responded, “The only thing that’s fake on this stage is Floyd’s f**king hairline.”

Logan brought up Floyd’s domestic violence conviction in an effort to rip on Mayweather. Floyd said Logan is entitled to his opinion on the matter but quickly changed the subject.

The Paul bros proceeded to mock Floyd’s age — Floyd told them he’s gonna treat them like one of his grandkids and whoop their asses.

So, grab a snack and stretch your legs, but be sure to check back in when things kick off in a matter of minutes.

Logan arrived to Hard Rock Stadium in Miami like a badass … showing up in a chopper. Of course, his lil’ bro, Jake, was there to hype him up!! 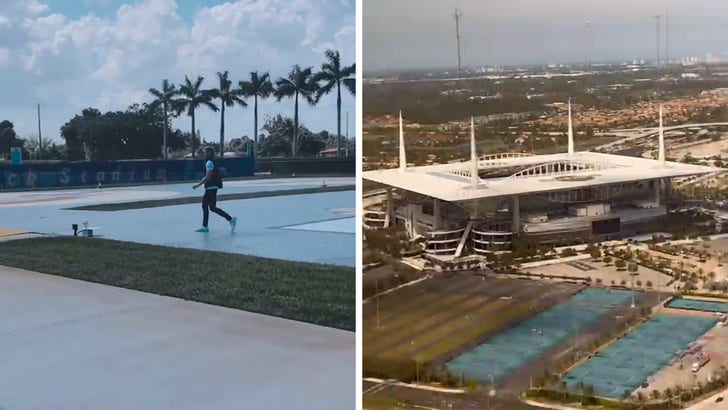 This should be good …

Logan Paul and Floyd Mayweather are going to stand face-to-face in Miami on Thursday in an event to promote their upcoming boxing match … and you KNOW it’s gonna be a spectacle.

It’s all going down at 12 PM PT — and we’ll live stream the whole thing here.

Logan has been extremely confident he’ll be able to bang with one of the greatest pugilists of all time. Expect to hear a lot from him.

Floyd — who’s 50-0 as a pro fighter — is also a master trash talker who famously verbally sparred with Conor McGregor for months leading up to their big fight in 2017.

So, when Floyd and Logan — two masters of promotion — get together, you know it’s gonna get crazy.

The two are set to throw down at Hard Rock Stadium in Miami on June 6. Ex-NFL star Chad Ochocinco has agreed to fight on the undercard, though his opponent has not been confirmed yet.

Chad is also expected to be at the media event on Thursday — so plan to hear from him as well.

Rafael Nadal, after ‘listening to my body,’ won’t play at Wimbledon, Olympic Games

Rafael Nadal said Thursday he will not play in this year's Wimbledon or at the Olympic Games.In a series...

The relationship between Aaron Rodgers and the Green Bay Packers has not been amended, and it appears the reigning...

Joel Embiid is no stranger to the tedium of the training table, the shudder before jumping in an ice...

After a shortened 60-game 2020 MLB season, we're already past that point in baseball's return to a 162-game schedule...

The New York Islanders split two games in Tampa Bay, giving them a golden opportunity to take control of...

Amid all the action at the Euros and Copa America, the summer transfer window has opened for some leagues...

Latest news on cases and vaccines

VA sees trust improve by 24% in five years, thanks to veterans experience effort