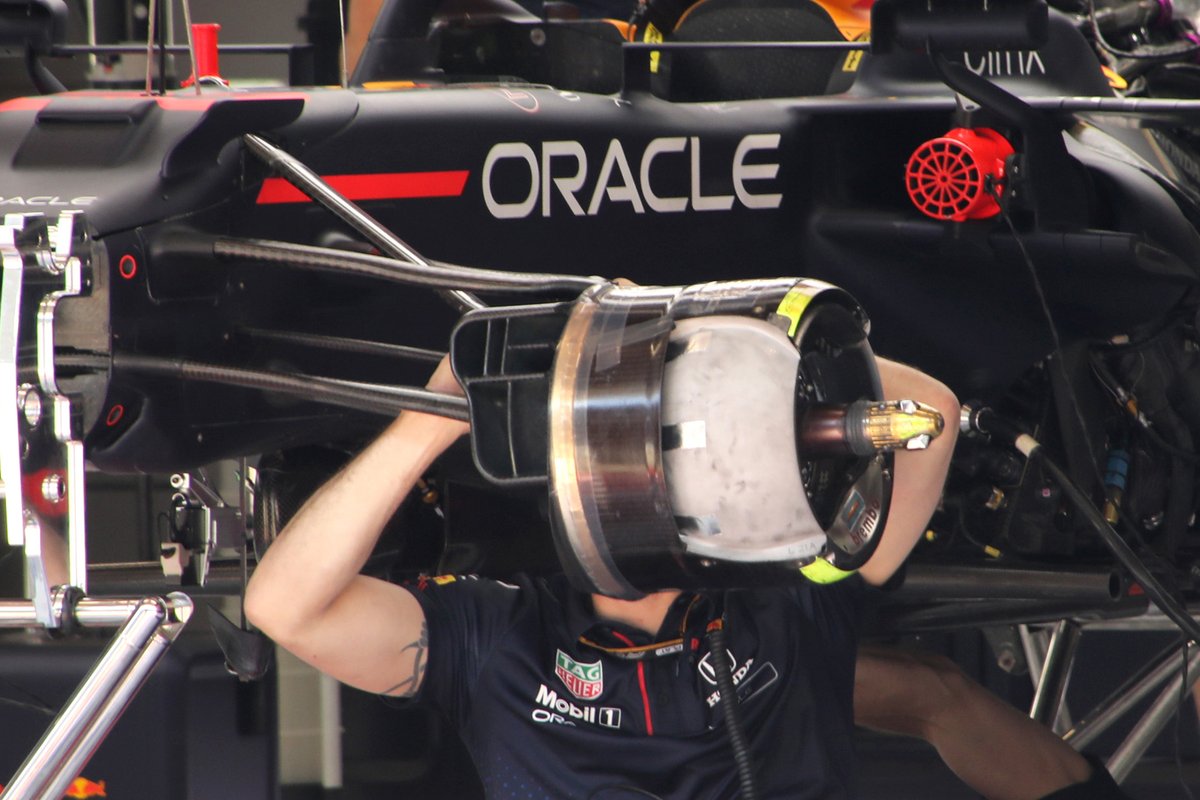 The front brake duct of the Red Bull RB16B with a surface coating used on the crossover section in order to limit the transfer of heat created under braking and that would otherwise increase the bulk temperature of the tyre. The divider arrangement inside the inlet is also different for this race, again, having been adjusted for the Portuguese GP too. 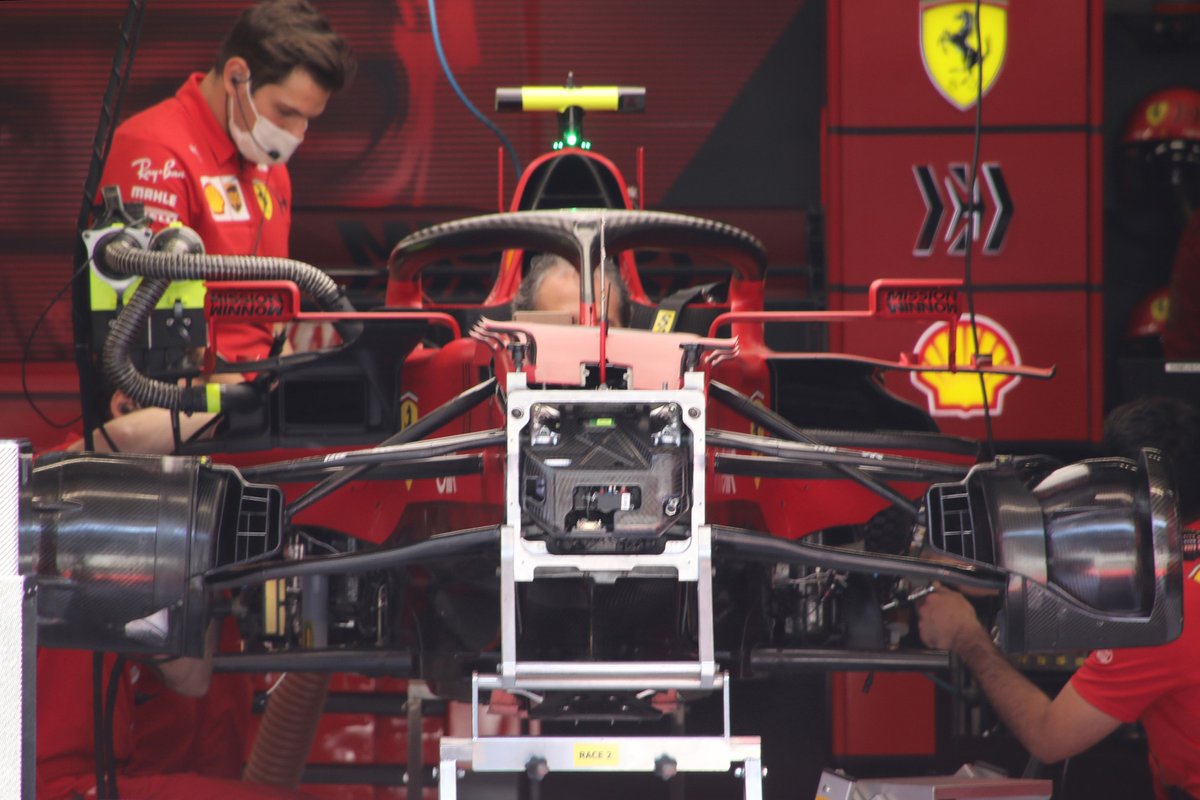 Ferrari has set up its car with an asymmetric front brake duct layout, as it looks to treat the front tyres differently in terms of temperatures that are transferred from the brakes into the tyre. 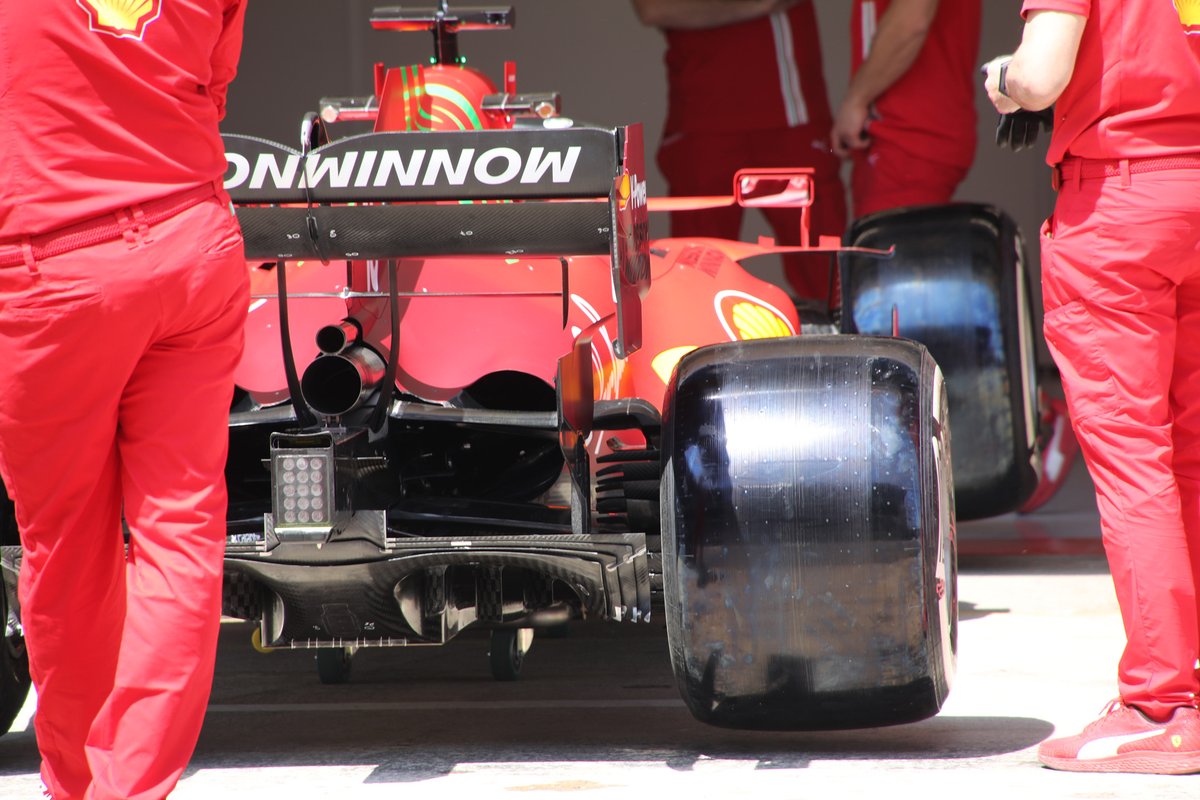 A look at the diffuser and rear brake duct fins on the Ferrari SF21 as the team waits for the car to be scrutineered. 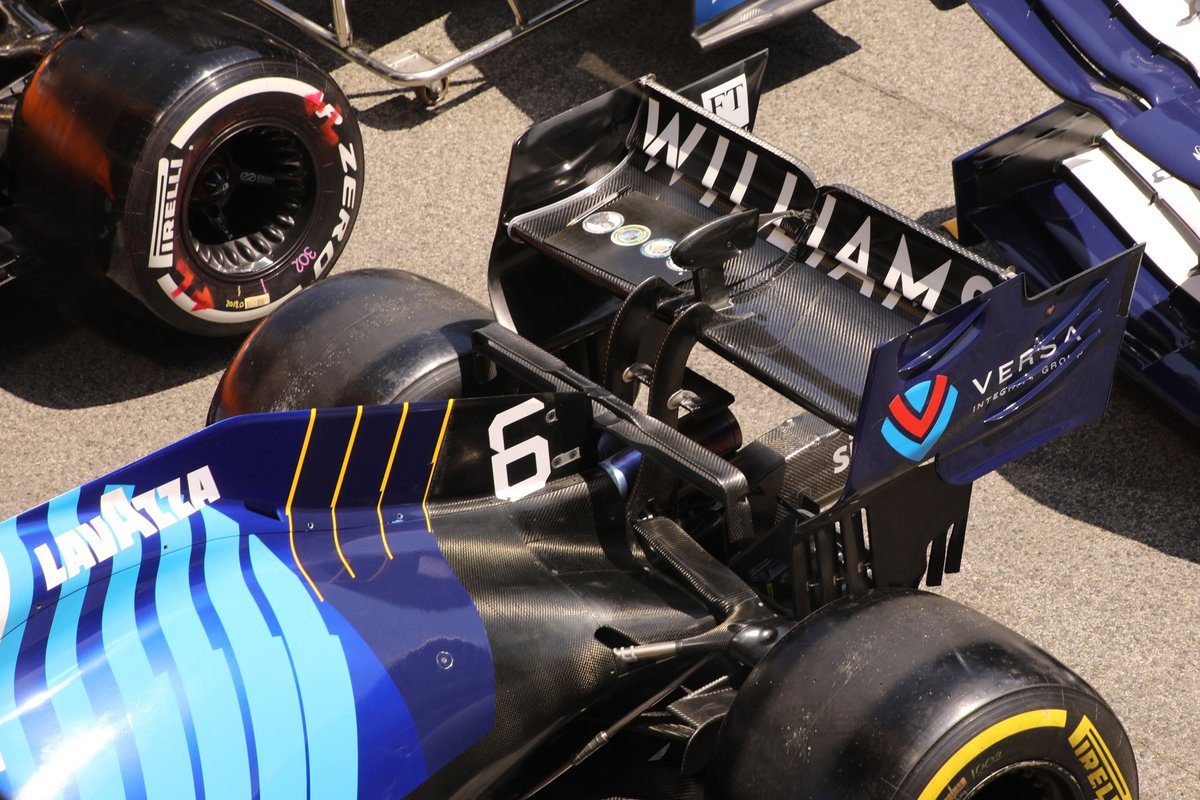 Top-down overview of the Williams FW43B rear end, note addition of a monkey-seat winglet between the rear wing pillars and the twisted nature of the upper T-Wing element. Also look at the heavy contouring of the endplate which has allowed it to increase the role of the upwash strikes and, more importantly, place one in the upper front corner too. 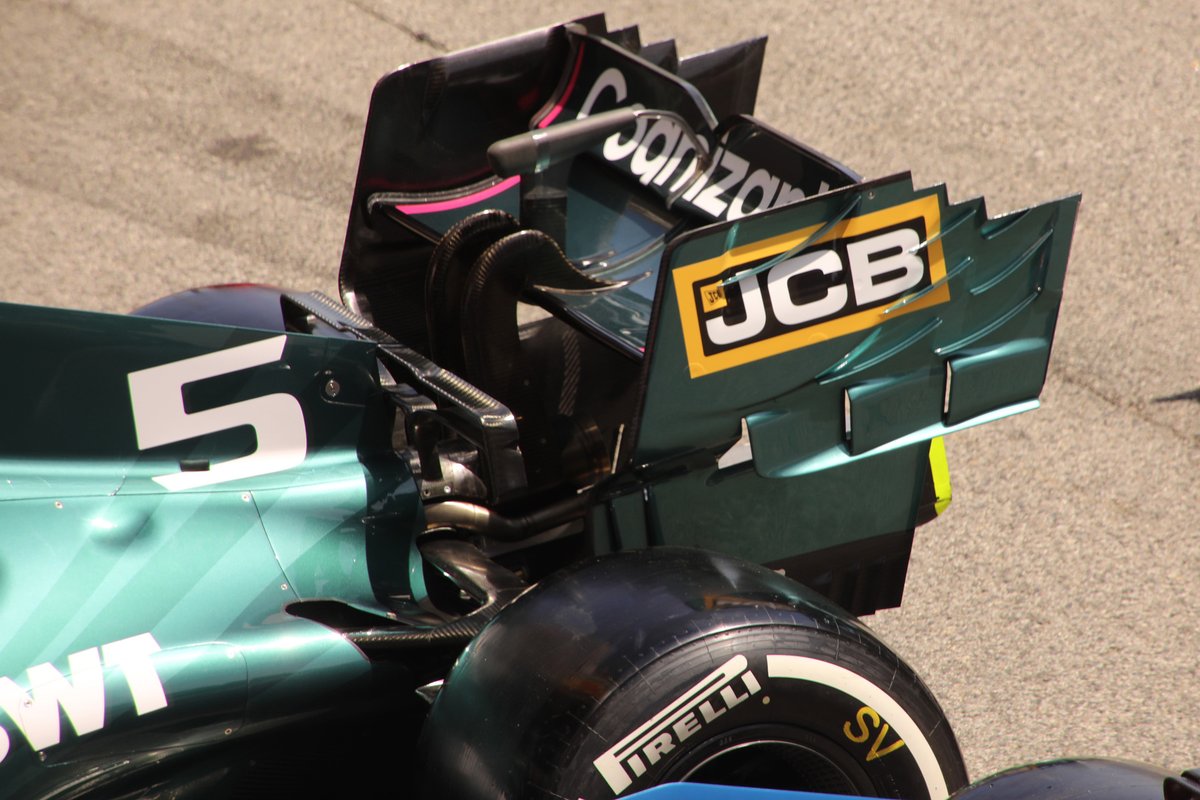 Aston Martin with a similar design on the endplate allows that upwash strike to be deployed in the upper front corner. 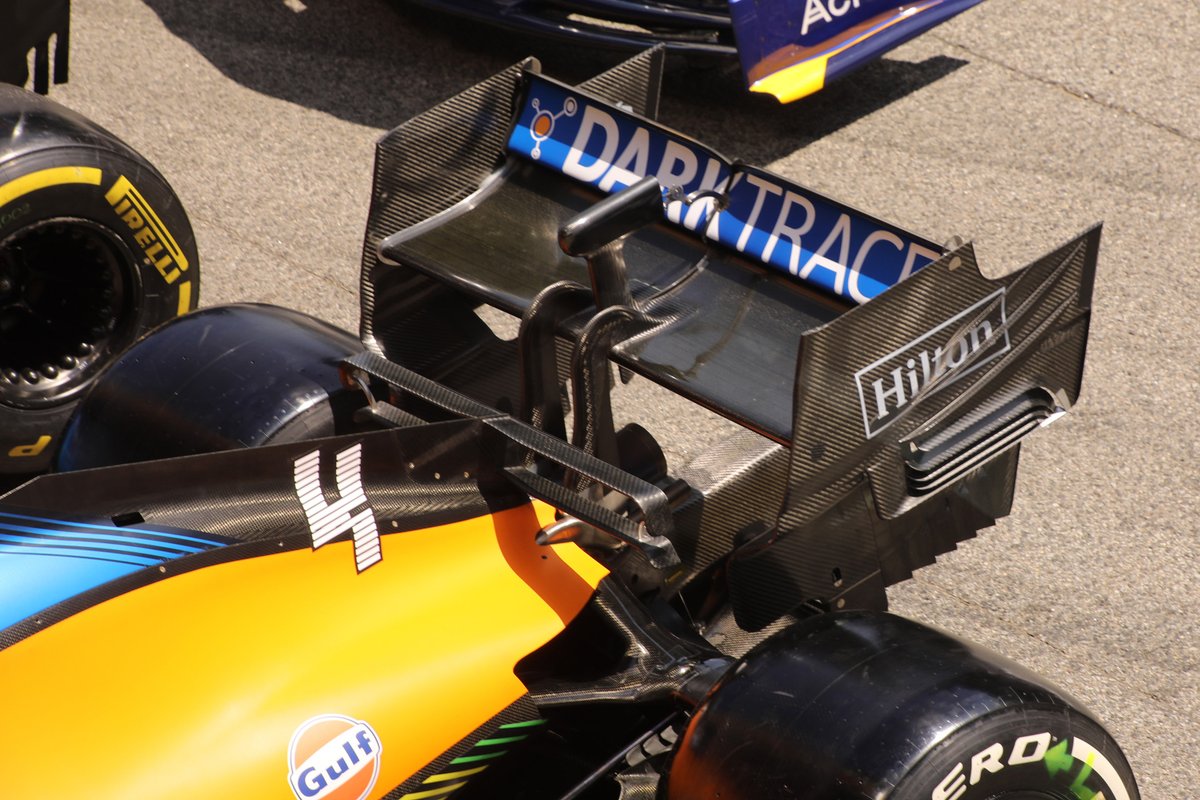 McLaren doesn’t have the upwash strike in the upper front corner but note how the endplate leans away from the vertical. McLaren also has a twin T-Wing arrangement for the Spanish GP. 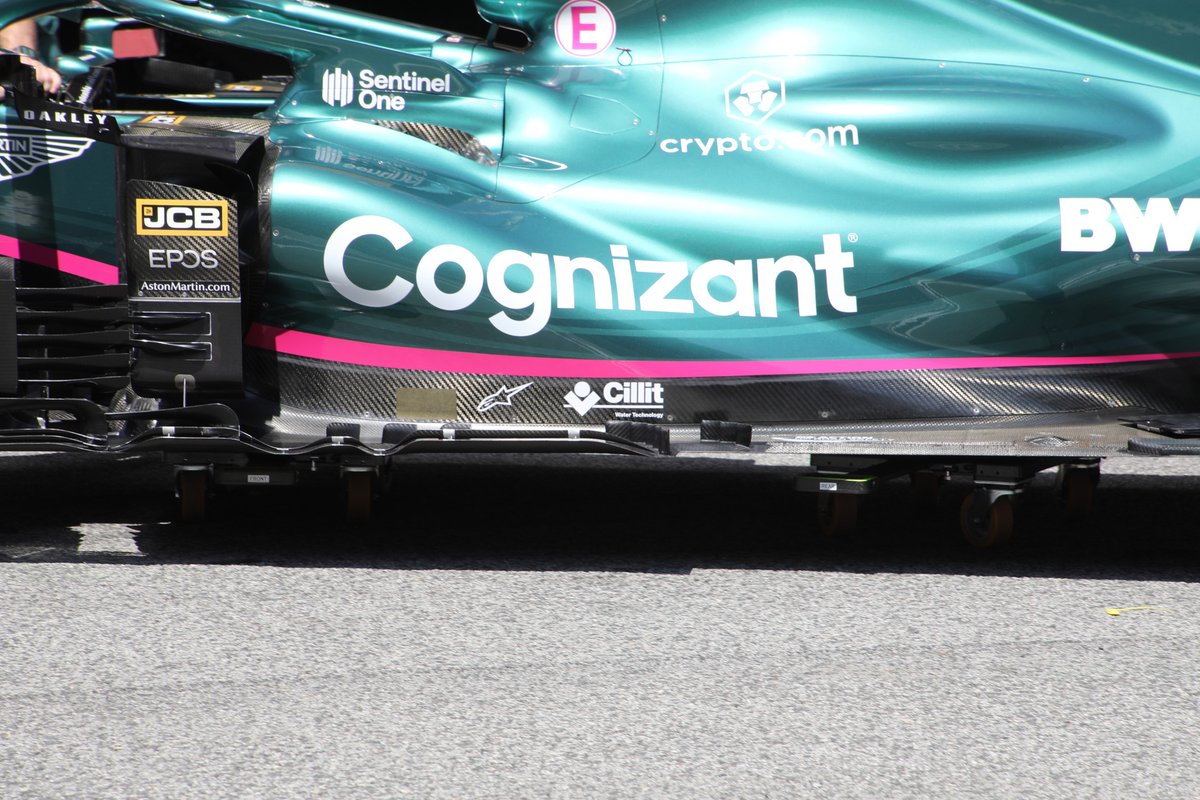 The updated floor that Aston Martin ran on Lance Stroll’s car in Portugal and will also be on Sebastian Vettel’s car in Spain. It features an extra wavy section on the floor’s edge and a scroll extension. 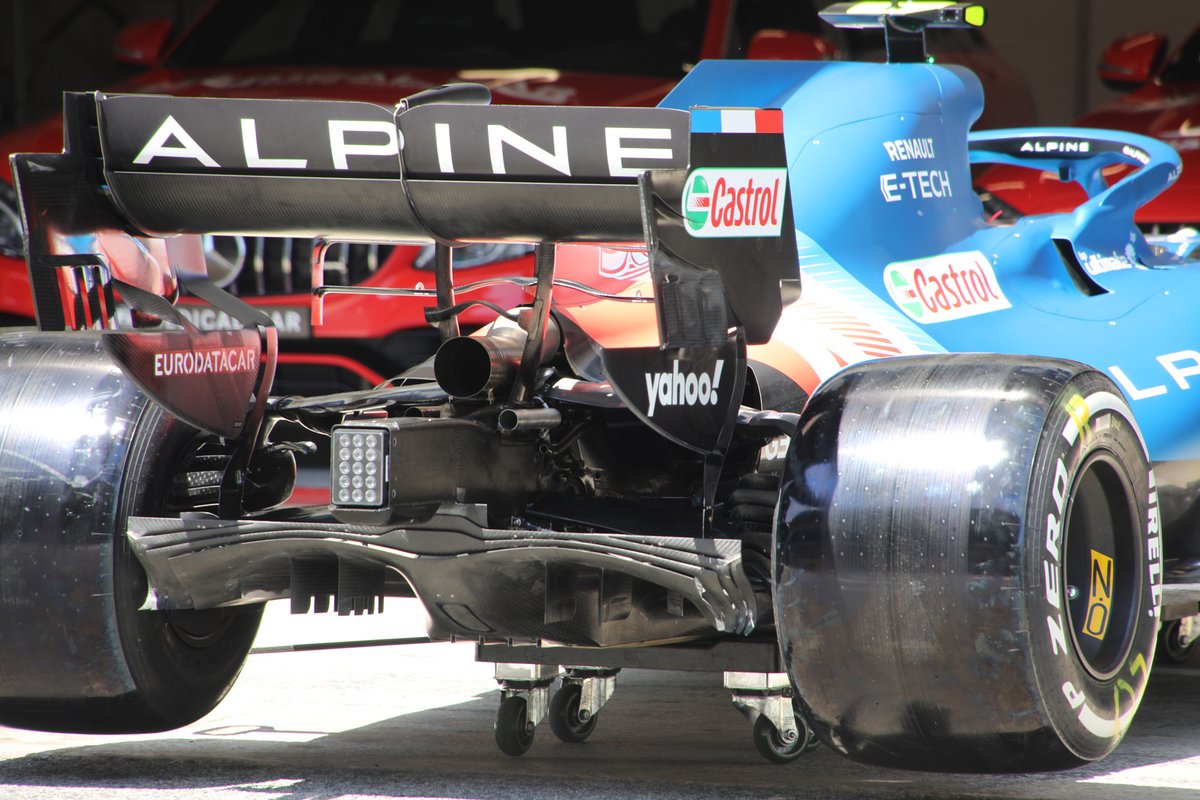 The Alpine A521 diffuser, which has been altered recently and features a shorter fence in the outboard section. 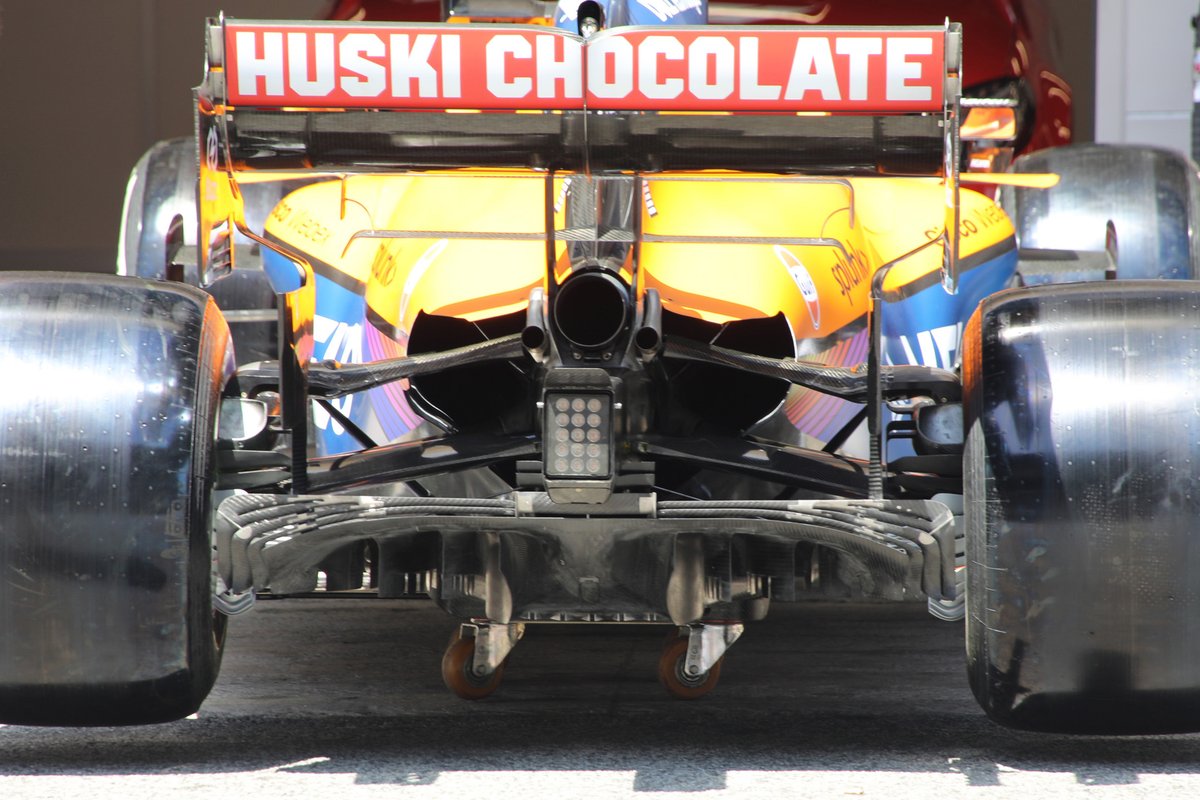 The McLaren rear end, note the large cooling outlet and the tight-knit rear brake duct winglets in the lower half. It is still the only team to have inner strakes join up to the transition in the centre too. 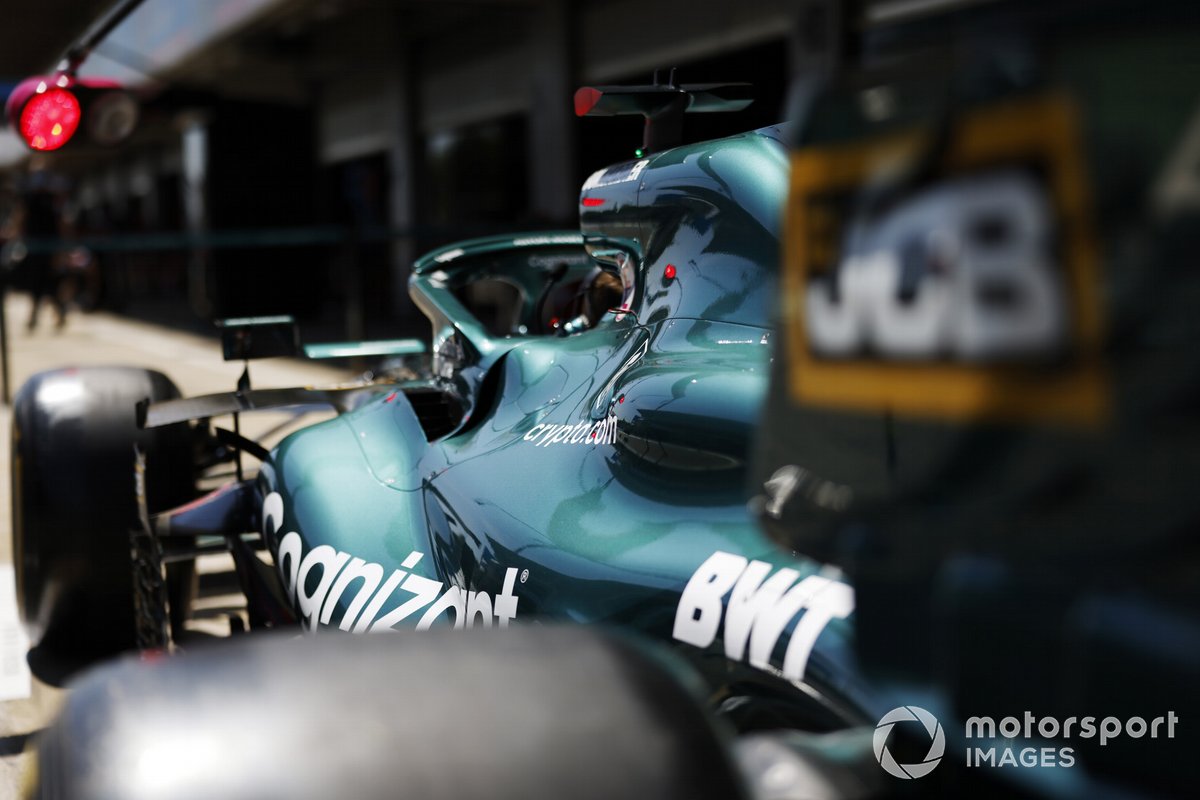 A look down the flank of the Aston Martin AMR21 shows how much cooling the team has open on the sidepod panel. 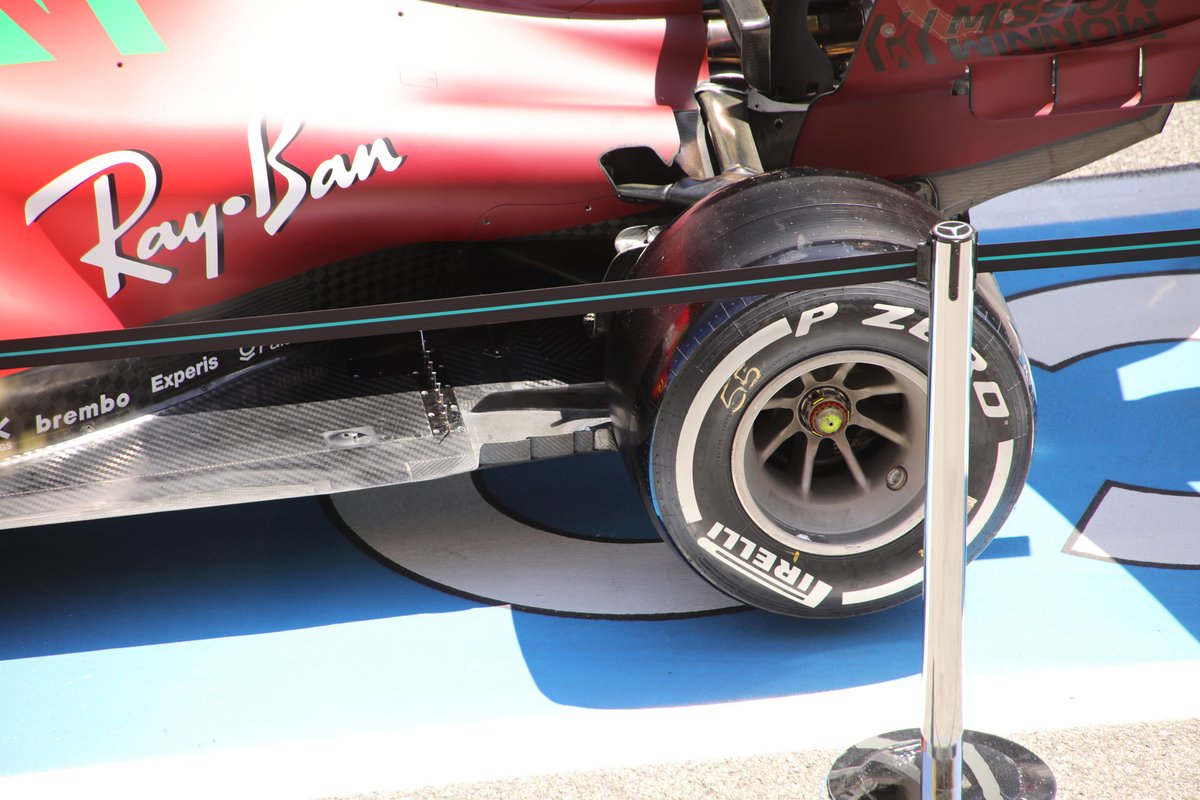 A look at the floor area ahead of the rear tyre on the Ferrari SF21, with the four-fin arrangement on the floor’s edge and a longer strake inboard of that. 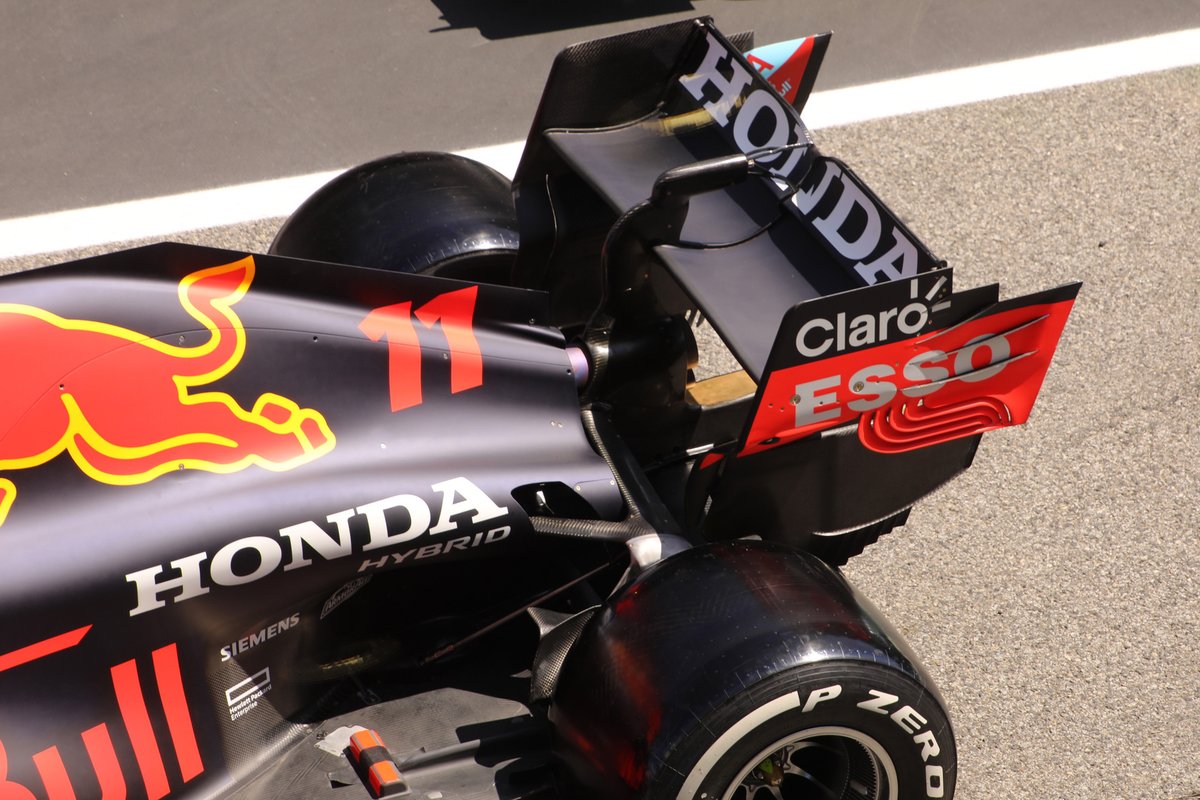 Overview of Red Bull’s rear wing on Sergio Perez’s car, note the lack of T-Wing whereas most of the teams will have one for Barcelona. 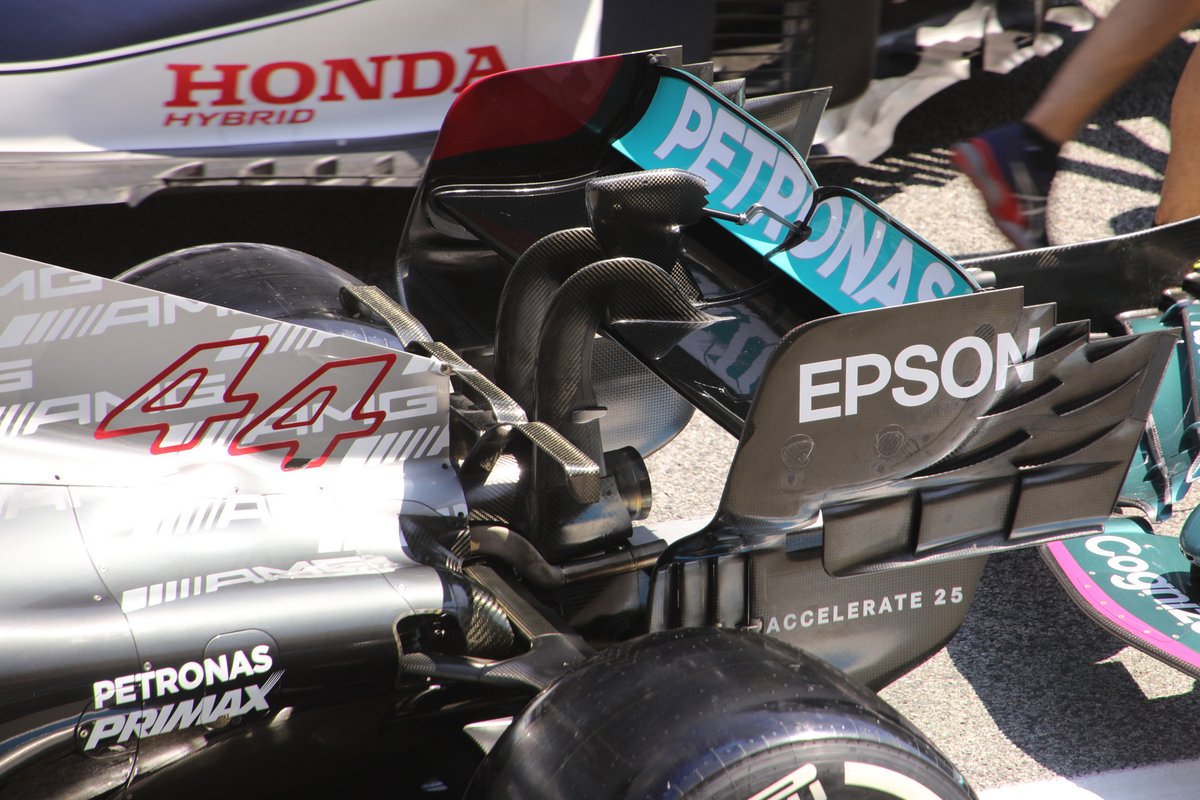 The higher downforce rear wing on the Mercedes W12, along with the W-shaped T-Wing. 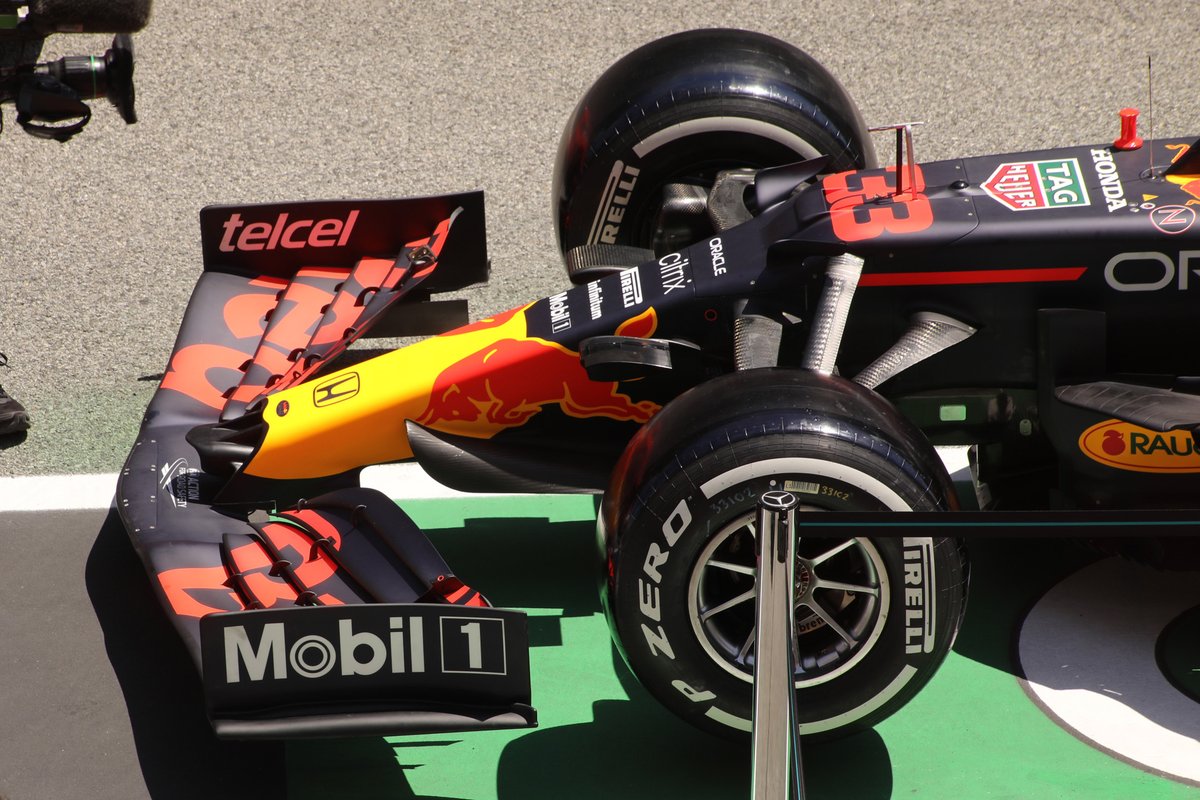 A good overview of the Red Bull RB16B’s front end. 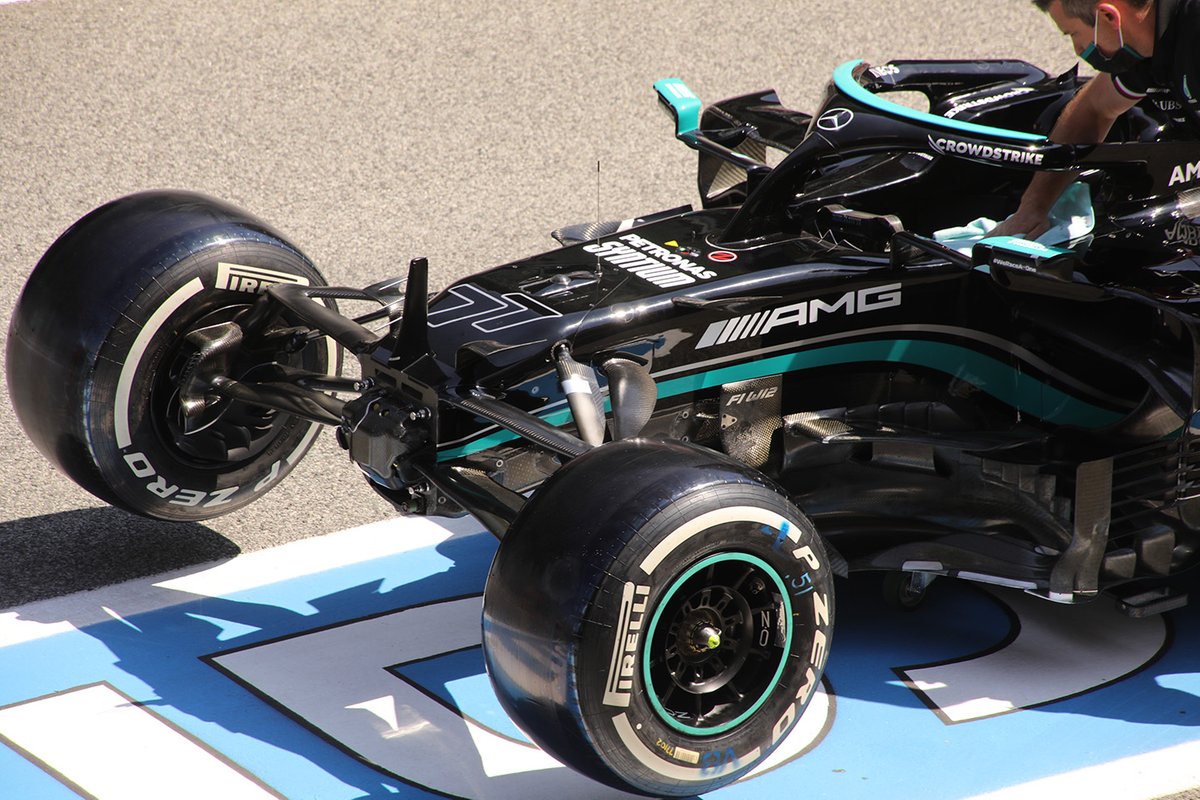 The Mercedes W12 taken down to the pitlane for scrutineering without the nose and front wing attached gives us a great view of the front brake duct fence and the fins mounted on it. 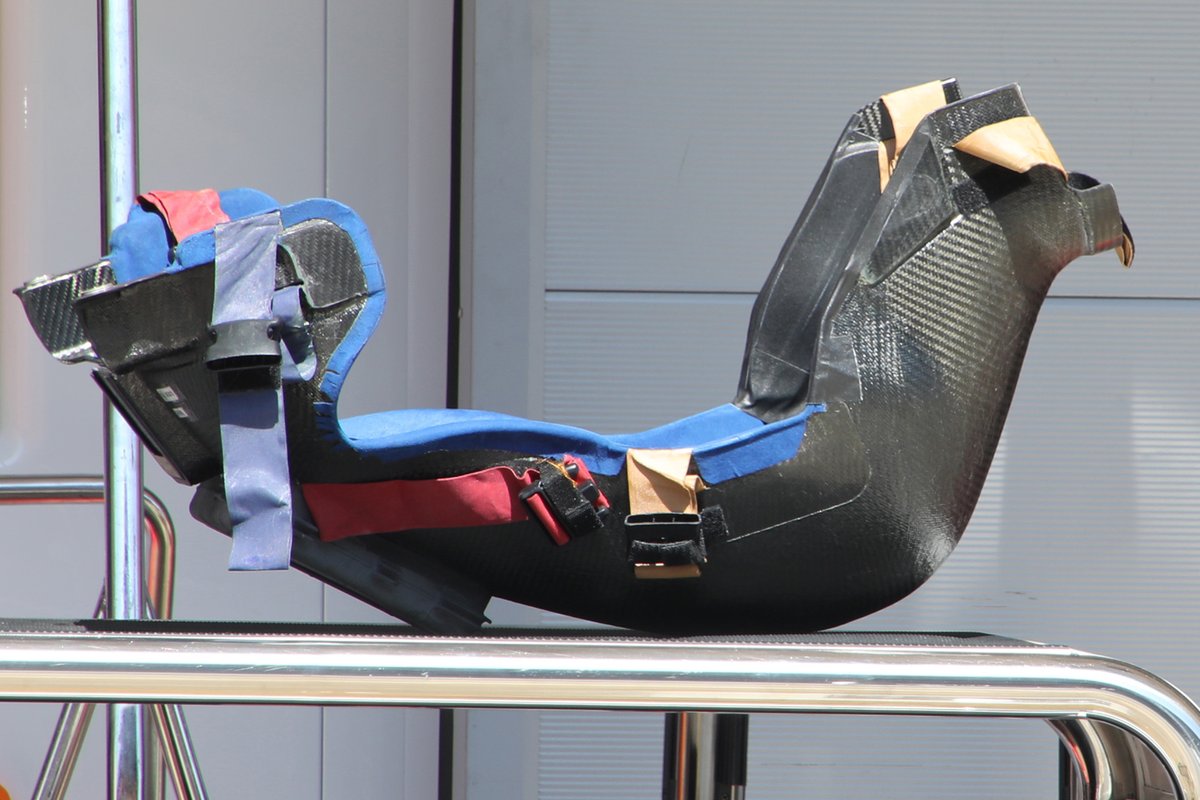 A seat from the Alpine A521, these are inserts that are custom-made for each driver in order that it fit to their body and providing the necessary points of contact in order that the seat can be extricated along with the driver if they’re in an…

Rafael Nadal, after ‘listening to my body,’ won’t play at Wimbledon, Olympic Games

Rafael Nadal said Thursday he will not play in this year's Wimbledon or at the Olympic Games.In a series...

The relationship between Aaron Rodgers and the Green Bay Packers has not been amended, and it appears the reigning...

Joel Embiid is no stranger to the tedium of the training table, the shudder before jumping in an ice...

After a shortened 60-game 2020 MLB season, we're already past that point in baseball's return to a 162-game schedule...

The New York Islanders split two games in Tampa Bay, giving them a golden opportunity to take control of...

Amid all the action at the Euros and Copa America, the summer transfer window has opened for some leagues...

Caught between two nations | The Star